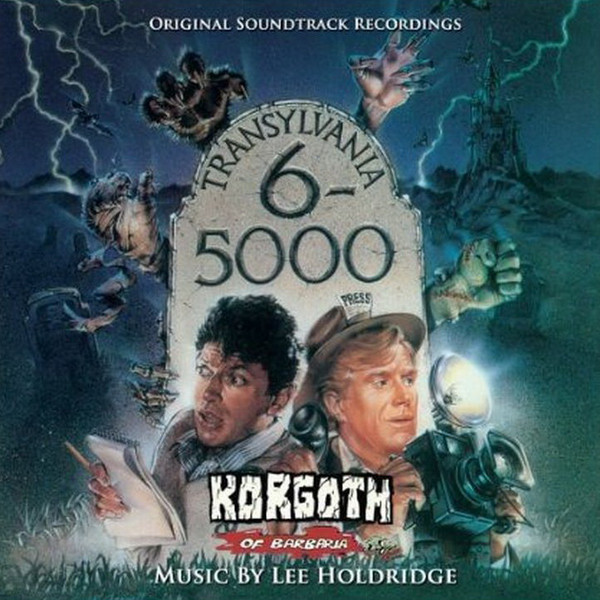 The CD scores of TRANSYLVANIA 6-5000 and KORGOTH OF BARBARIA, signed by Lee Holdridge!

The CD scores of TRANSYLVANIA 6-5000 and KORGOTH OF BARBARIA, signed by Lee Holdridge!

TRANSYLVANIA 6-5000 is a distinctly unfunny horror spoof from 1985 about a couple of tabloid reporters sent by their editor to modern day Transylvania to uncover the truth behind a reported Frankenstein sighting. While there, they encounter other classic horror film staples such as a wolf-man, a female vampire, a hunchback and an unraveling mummy. Each creature has a twist that makes them ultimately less monstrous than the local villagers have been led to believe. Recognizing that their film needed some help, the producers turned to composer Lee Holdridge for the musical duties. For the musical score, Holdridge chooses to play straight man to the film’s attempts at broad humor and also manages to add some clever asides with a variety of musical quotations from familiar composers such as Tchaikovsky, Prokofiev, Dvorak, Wienwiaski and Shostakovich. In addition, the composer pokes fun at the Glenn Miller standard, Pennsylvania 6-5000.

KORGOTH OF BARBARIA, created by Aaron Springer of DEXTER’S LABORATORY and SPONGEBOB SQUAREPANTS, was a half-hour animated comedy television pilot that aired on the Cartoon Network’s Adult Swim in June, 2006. Presented as straightforward as any other barbarian hero, KORGOTH was, in fact, a parody of the sword-and-sorcery genre, presenting the exploits of a Conan-esque hero noted for his bad temper, laziness and slovenly habits. The score is a fusion of trash/heavy metal guitars and broad symphonic adventure music, providing an edgy propulsion appropriate to the show’s satire while supporting its heroic fantasy conceptualization. Sadly, only the one episode aired and the show was dropped before production began on any further episodes.

Lee Holdridge was born in Port-au-Prince, Haiti in 1944. He spent his early years in Costa Rica, beginning music studies on the violin at the age of ten with Hugo Mariani, then the conductor of the National Symphony Orchestra of Costa Rica. Later, Holdridge moved to New York to continue his music studies and begin his professional career as a composer. Holdridge’s successes in New York came to the attention of Neil Diamond who brought Holdridge to Los Angeles to write arrangements for his forthcoming albums. A string of Gold and Platinum hits followed, which led to Diamond and Holdridge collaborating on the film score for Jonathan Livingston Seagull. Since that time, Holdridge has scored numerous film such as Splash, Big Business, Mr. Mom, Micki & Maude, 16 Days Of Glory, The Beastmaster, Sylvester, A Tigers’ Tale, El Pueblo Del Sol, Old Gringo and Pastime. His television work includes Moonlighting, Beauty and the Beast, the complete eight hour remake of East of Eden, The Tenth Man, Dreamer of Oz, Hallmark Hall Of Fame’s One Against the Wind and The Story Lady. Lee also began a very successful collaboration with Moriah Films, the film division of the Simon Wiesenthal Center, with the Academy Award winning documentary feature film The Long Way Home. In addition to his film career, Mr. Holdridge has had an extensive repertoire of concert works performed and recorded. He has also worked with many major recording artists having written, arranged and conducted for Placido Domingo, Barbra Streisand, Brian May of Queen, Stevie Wonder, Neil Diamond, John Denver, Neil Sedaka, Daniel Rodriguez, Al Jarreau, Dionne Warwick, Diana Ross, Natalie Cole, Jane Oliver and many others.

BUYSOUNDTRAX Records presents TRANSYLVANIA 6-5000. This is a limited edition release of 1000 units.