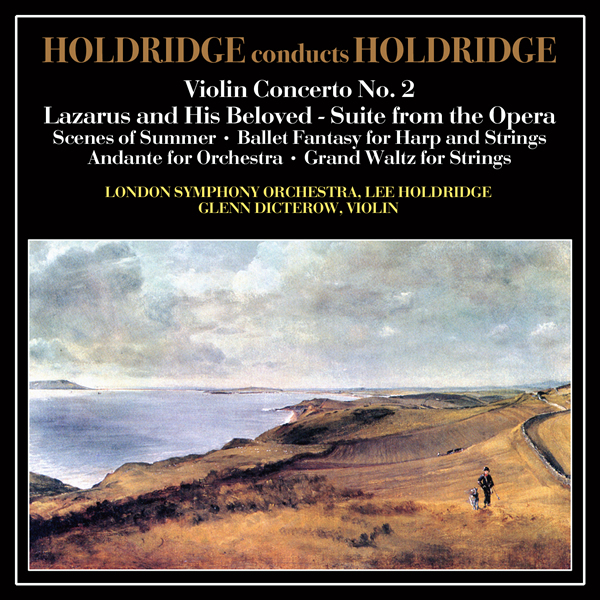 The CD of HOLDRIDGE CONDUCTS HOLDRIDGE, signed by Lee Holdridge!

BuySoundtrax Records is pleased to announce the re-release of HOLDRIDGE CONDUCTS HOLDRIDGE, a compilation of classical works composed by Lee Holdridge.

Previously released by Citadel records, famed film composer Lee Holdridge (Splash & The Beauty and The Beast TV Series) conducts the London Symphony Orchestra and The Los Angeles String Orchestra in performances of his Violin Concerto No. 2 (Glen Dicterow, soloist); Lazarus and His Beloved (Suite from the Opera); Scenes of Summer suite , Ballet Fantasy for Strings and Harp,Andante for Orchestra, Adagio for organ/violin & strings in G minor and The Grand Waltz for Strings.

Lee Holdridge was born in Port-au-Prince, Haiti in 1944. He spent his early years in Costa Rica, beginning music studies on the violin at the age of ten with Hugo Mariani, then the conductor of the National Symphony Orchestra of Costa Rica. Later, Holdridge moved to New York to continue his music studies and begin his professional career as a composer. Holdridge’s successes in New York came to the attention of Neil Diamond who brought Holdridge to Los Angeles to write arrangements for his forthcoming albums. A string of Gold and Platinum hits followed, which led to Diamond and Holdridge collaborating on the film score for JONATHAN LIVINGSTON SEAGULL. Since that time, Holdridge has scored numerous film such as SPLASH, BIG BUSINESS, MR. MOM, MICKI & MAUDE, 16 DAYS OF GLORY, SYLVESTER, A TIGER’S TALE, EL PUEBLO DEL SOL, OLD GRINGO, PASTIME and BROTHERS AT WAR. His television work include MOONLIGHTING, BEAUTY AND THE BEAST, the complete eight hour remake of EAST OF EDEN, THE TENTH MAN, DREAMER OF OZ, Hallmark Hall Of Fame’s ONE AGAINST THE WIND and THE STORY LADY. Lee also began a very successful collaboration with Moriah Films, the film division of the Simon Wiesenthal Center, with the Academy Award winning documentary feature film THE LONG WAY HOME. In addition to his film career, Mr. Holdridge has had an extensive repertoire of concert works performed and recorded. He has also worked with many major recording artists having written, arranged and conducted for Placido Domingo, Barbra Streisand, Brian May of Queen, Stevie Wonder, Neil Diamond, John Denver, Neil Sedaka, Daniel Rodriguez, Al Jarreau, Dionne Warwick, Diana Ross, Natalie Cole, Jane Oliver and many others.
1. Scenes Of Summer: Festival
2. Scenes Of Summer: Countryside
3. Scenes Of Summer: Dance
4. Lazarus And His Beloved:
Suite From The Opr: Part !
5. Lazarus And His Beloved:
Suite From The Opr: Part II
6. Violin Concerto No.2:
Allegretto Expressivo
7.Violin Concerto No.2:
Andante Meno Mosso
8. Violin Concerto No.2: Allegro Ritmico
9. Andante for Orchestra
10 Ballet Fantasy for Strings and Harp
11. Albinoni: Adagio for organ/violin & strings in G mino
12. Grand Waltz for Strings