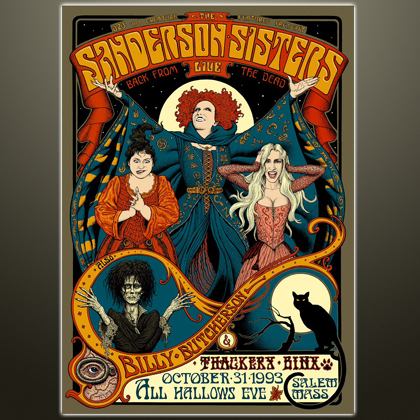 Exclusively for the occasion, Creature Features enlisted artist Miles Teves to produce this stunning giclée.  Teves, one of Hollywood’s most well-respected and sought-after conceptual artists, created key designs for films such as ROBOCOP – for which Teves did major design work for the title character – LEGEND, for which Teves designed Meg Mucklebones and Tim Curry’s Darkness character, and dozens of others, including EXPLORERS, SPIDER-MAN, TOTAL RECALL, KING KONG, PLANET OF THE APES, and IRON MAN.

The result was this devilishly clever 18″ x 25″ masterpiece, showcasing the three Sanderson sisters (with special guest Billy Butcherson) in the style of Bill Graham’s legendary 1960s concert posters from the Fillmore in San Francisco. The series was limited to an edition of 300 copies, to commemorate the 300th anniversary of the Sanderson sisters’ death – coincidentally, October 31, 1993, the date on which they return to Salem and the land of the living!

This supreme-quality giclée is one of a handful of artist proofs, each hand-signed with Mr. Teves’ distinctive autograph and manufactured by Static Medium in Los Angeles using professional, archival quality inks and thick-stock paper, identical to the quality of Mondo.  With proper care, it will last a lifetime and is not available through any other authorized vendor.  Creature Features is the exclusive producer and seller! Avoid resellers and scalpers – buy yours from the source.

Update: The original series of 300 is SOLD OUT. We have a small number of Artist’s Proof copies from Mr. Teves, signed and inscribed AP. Supplies are very limited!