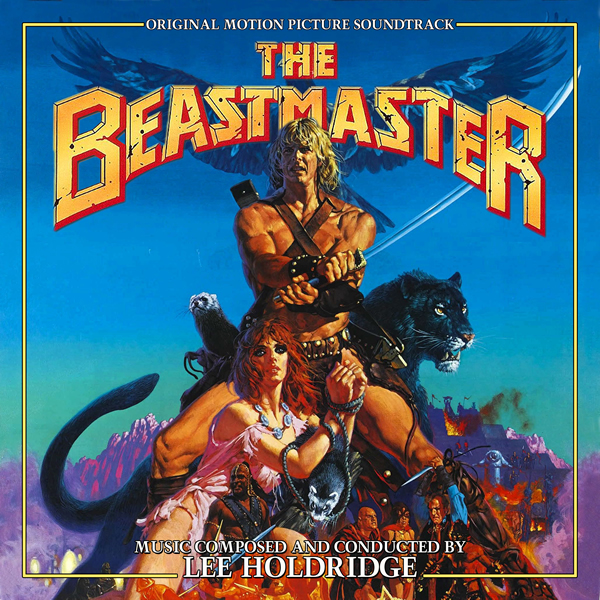 The deluxe 2-CD set of BEASTMASTER, signed by Lee Holdridge!

The deluxe 2-CD set of BEASTMASTER, signed by Lee Holdridge!

Dragon’s Domain Records presents the soundtrack release of THE BEASTMASTER, the 1982 fantasy classic directed by Don Coscarelli (PHANTASM, BUBBA HO-TEP, JOHN DIES AT THE END), written by Coscarelli and Paul Pepperman, starring Marc Singer (SOMETHING FOR JOEY, V), Tanya Roberts (CHARLIE’S ANGELS, SHEENA), John Amos (GOOD TIMES, ROOTS, COMING TO AMERICA), Joshua Milrad and Rip Torn (KING OF KINGS, EXTREME PREJUDICE, MEN IN BLACK) as Maax, featuring music composed and conducted by Lee Holdridge (JONATHAN LIVINGSTON SEAGULL, SPLASH, BEAUTY AND THE BEAST).
Released in 1982 at the beginning of a renaissance of fantasy films that include HAWK THE SLAYER, DRAGONSLAYER, EXCALIBUR and CONAN THE BARBARIAN, THE BEASTMASTER was loosely based on a 1959 Andre Norton science fiction novel, THE BEAST MASTER, with a visual nod borrowed more from classic 1960s peplum and the heroic fantasies of Ray Harryhausen films. THE BEASTMASTER tells the story of Dar, a valiant warrior who can telepathically communicate with animals. Dar (Singer) is a stolen son of royalty, kidnapped from the queen’s womb by a witch in service to Maax (Torn), an evil sorcerer. Dar is saved from sacrifice by a kind villager, who raises him and teaches the young prince how to fight and utilize his uncanny ability to commune with animals. Facing life alone after his village and its people are destroyed by Jun warriors in league with Maax, Dar rescues a slave girl (Roberts) and pairs up with boy prince Taj and former King’s guard Seth (John Amos), along with his animal companions, to fight against Maax. Released in the US in late August 1982 (three months after CONAN), THE BEASTMASTER managed to overcome a lukewarm box office performance with a strong cult following that generated two sequel movies and a Canadian television series that aired 66 episodes over three seasons in 1999-2002.
THE BEASTMASTER was Coscarelli’s fourth film, and his first studio-backed picture after making three indie movies. The third of those was the iconic horror classic PHANTASM, with first put him on the map as a director to watch. In writing the script for THE BEASTMASTER, Coscarelli and Pepperman would listen to famous epic scores from the 1940s and 1950s by composers like Max Steiner and Dimitri Tiomkin. When they began to edit the film, they started tracking in music from these composers. Coscarelli knew of Holdridge’s film music and had been impressed by Holdridge’s violin concerto and, was very impressed with it. With THE BEASTMASTER, Holdridge composed a large-form symphonic score, recorded in Rome, that complemented the film’s sensitive characterization of Dar as well as providing an anthemic main theme for the character’s power and heroism. The main theme is a broad, adventurous motif for full orchestra which suitably propels the film along. In addition, Holdridge provided a pleasant flute love theme over plucked harp, wind chimes and finger-cymbals; a low tympani motif for the evil, pagan priest; and a synthesizer motif used to reflect the sorcery and power of the Beastmaster. THE BEASTMASTER remains one of the great fantasy film scores of the 1980s and continues to age well.
Lee Holdridge was born in Port-au-Prince, Haiti in 1944. He spent his early years in Costa Rica, beginning music studies on the violin at the age of ten with Hugo Mariani, then the conductor of the National Symphony Orchestra of Costa Rica. Later, Holdridge moved to New York to continue his music studies and begin his professional career as a composer. Holdridge’s successes in New York came to the attention of Neil Diamond who brought Holdridge to Los Angeles to write arrangements for his forthcoming albums. A string of Gold and Platinum hits followed, which led to Diamond and Holdridge collaborating on the film score for JONATHAN LIVINGSTON SEAGULL. Since that time, Holdridge has scored numerous film such as SPLASH, BIG BUSINESS, MR. MOM, MICKI & MAUDE, 16 DAYS OF GLORY, SYLVESTER, A TIGER’S TALE, EL PUEBLO DEL SOL, OLD GRINGO, PASTIME and BROTHERS AT WAR. His television work include MOONLIGHTING, BEAUTY AND THE BEAST, the complete eight hour remake of EAST OF EDEN, THE TENTH MAN, DREAMER OF OZ, Hallmark Hall Of Fame’s ONE AGAINST THE WIND and THE STORY LADY. Lee also began a very successful collaboration with Moriah Films, the film division of the Simon Wiesenthal Center, with the Academy Award winning documentary feature film THE LONG WAY HOME. In addition to his film career, Mr. Holdridge has had an extensive repertoire of concert works performed and recorded. He has also worked with many major recording artists having written, arranged and conducted for Placido Domingo, Barbra Streisand, Brian May of Queen, Stevie Wonder, Neil Diamond, John Denver, Neil Sedaka, Daniel Rodriguez, Al Jarreau, Dionne Warwick, Diana Ross, Natalie Cole, Jane Oliver and many others.
Previously released on compact disc by Quartet Records in 2013 as a limited edition release that quickly sold out, Dragon’s Domain Records is excited to bring THE BEASTMASTER back into the marketplace at the request of the composer, newly remastered by Digital Outland under the composer’s supervision. The end result is a rendition of the BEASTMASTER score that most closely matches what Lee had imagined back in 1982. The booklet includes exclusive liner notes written by author Randall Larson with the participation of the composer. Dragon’s Domain Records presents THE BEASTMASTER on 2 CDs. Disc 1 opens with the original album program from 1983 followed by the music cues as they appear in the movie in film order, continuing onto Disc 2.

THE BEASTMASTER is a limited edition release of 1000 units.