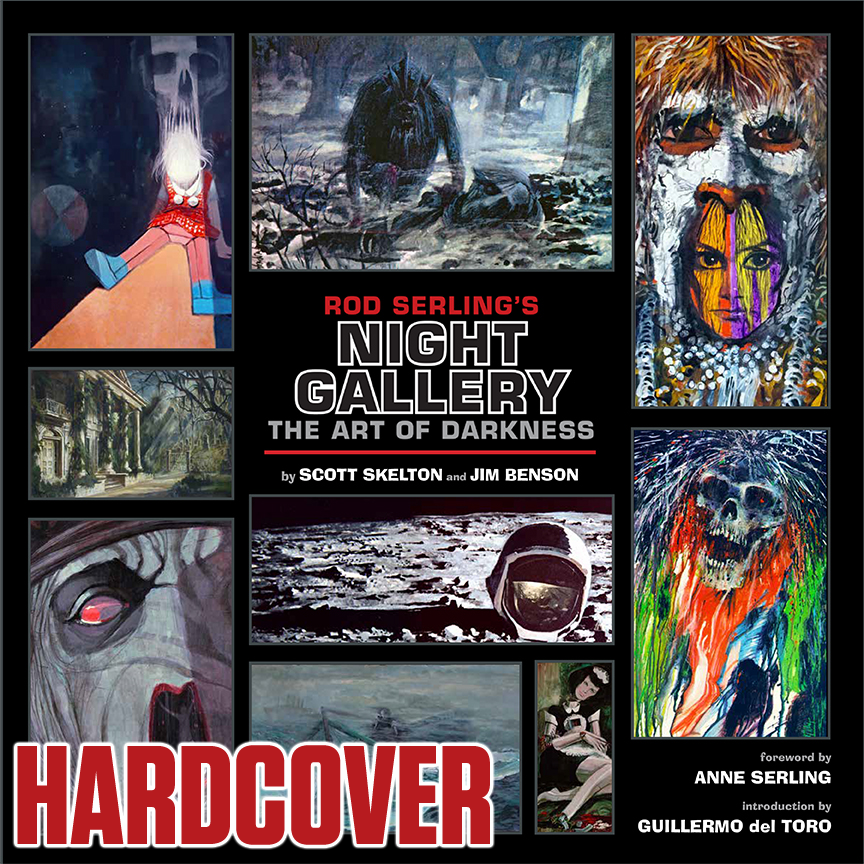 The hardcover edition of ROD SERLING’S NIGHT GALLERY: THE ART OF DARKNESS!

Fifty years ago, NBC-TV premiered the bone-chilling, three-episode pilot that gave birth to the supernatural series Rod Serling’s Night Gallery. Millions of viewers were riveted to every episode—often watching through their fingers—as the uncanny events unfolded. After three seasons the show ended—but the memories lingered.

Though the quality of the episodes were hotly debated among fans and authorities from Stephen King to Guillermo del Toro, virtually all who tuned in agreed that the series’ most memorable elements were the paintings and sculptures showcased within. Chillingly introduced by the writer-host in his inimitable voice, these macabre masterpieces were the works of artists Thomas J. Wright, Jaroslav Gebr and Phil Vanderlei, and have remained the stuff of dreams and nightmares for generations.

A quarter-century ago, an intrepid duo of dedicated Night Gallery historians banded together to dig deep into the history of the series. Co-authors Scott Skelton and Jim Benson wrote Rod Serling’s Night Gallery: An After Hours Tour, which provided the definitive history of the show—but sadly went to print without a single illustration from the series. Taylor L. White, publisher and proprietor of the genre emporium Creature Features, joined the search to bring the original paintings and sculptures to light.

For two and a half decades, this trio followed a trail around the world to discover the whereabouts of the paintings. The intense search grew to include a host of fellow aficionados, collectors, and historians, who painstakingly tracked down the whereabouts of each artful artifact, most presumed lost to the ages.

Now that search is complete, and Creature Features is proud to present the results: Rod Serling’s Night Gallery: The Art of Darkness, a deluxe art book measuring 11 x 11,” comprising 316 pages with more than 300 illustrations, including every painting ever shown in the Night Gallery. This includes in-depth commentary and background from the artists themselves, plus never-before-seen concept art and memorabilia.

Finding the paintings and licensing the artwork from NBC Universal has been a long, painstaking, and expensive process. Academy Award–winning writer-director Guillermo del Toro has joined the cause with an introduction to the book and offering access to the original paintings from his own vast personal collection.  The introduction has been penned by Anne Serling, Rod’s daughter and author of her own book, As I Knew Him: My Dad, Rod Serling.

And be sure to check out Rod Serling’s Night Gallery – An After Hours Tour, for the full history of the show (written by the same authors, Scott Skelton and Jim Benson). Autographed copies available—see more info here!