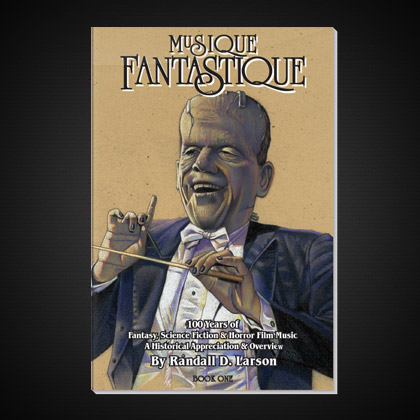 Out of print, elusive, and sought after for many years, Creature Features is pleased to announce a wholly re-written, expanded, and updated Second Edition:

When it was published in 1985 by Scarecrow Press, Randall D. Larson’s Musique Fantastique: A Survey of Film Music in the Fantastic Cinema was regarded as an important reference work for students and enthusiasts of both film music and fantastic films. The first comprehensive analysis of music in science fiction, fantasy, and horror films, Larson’s exhaustive analysis covered the use and techniques of music in these genre films from the silent era and the groundbreaking Golden Age of the ’30s and ’40s through the rise of electronics and the resurgence of symphonic film music in the late ‘70s and early ’80s. Taking the approach that film music has an especially unique responsibility in these genre films and has achieved significant advances in musical style and form in these genres, Larson examined in detail how music has been used to intensify the filmgoing experience in these types of movies.

Out of print, elusive, and sought after for many years, Creature Features is pleased to announce a wholly re-written, expanded, and updated Second Edition:

In this 2nd Edition, Larson expands his in-depth coverage of the subject to the present date (2010) while dynamically increasing the scope of each of the chapters in the 1st Edition. Now totaling more than 1700 pages and featuring a new introduction by film composer Christopher Young, Musique Fantastique, Second Edition will be published in four volumes:

Volume 2: Post Classical Cinema and Music Beyond Hollywood (The 1960s)

The First Edition has been thoroughly rewritten to include new research, interviews, and access to hundreds of films and soundtracks not available when the first book was written. “The explosion in genre product in cinema and television over the last two decades has demanded an extension of my original discussion to see where film music in these genres has gone since 1985,” Larson said. “I’ve also got a much better opportunity to write about these films, having written about film music for more than a quarter century. I’m not a musicologist and you won’t find a lot of discussion about musical theory and technique in Musique Fantastique II. What you will find is analysis about music’s dramatic function and purpose and what has been and remains unique about music for sci-fi, fantasy, and horror films. The 2nd Edition gives me an opportunity to revisit the old movies and analyze new ones, from the biggest Hollywood blockbusters to the cheesiest low-budget independent films from the farthest corners of the world, exploring what film music does to enhance these imaginative genres, and to get inside the heads of these music makers and discern their thoughts and perceptions.”

Randall D. Larson was the editor and publisher of CinemaScore: The Film Music Journal from 1981 to 1987, and for many years thereafter senior editor and reviewer for Soundtrack Magazine, until its demise in 2002, “The Score” columnist for Cinefantastique magazine, and a prolific writer in fields of music, fantasy literature, cinema, and public safety emergency communications. The original Musique Fantastique was his first book, published in 1985, and was followed by Music from the House of Hammer, Film Music Around the World, and several books about author Robert Bloch and about film novelizations. Larson currently writes the Soundtrax column for buysoundtrax.com, writes for cinefantastiqueonline.com and musicfromthemovies.com, and is the author of nearly 100 liner note commentaries for specialty soundtrack albums. He currently resides in Eureka, California.