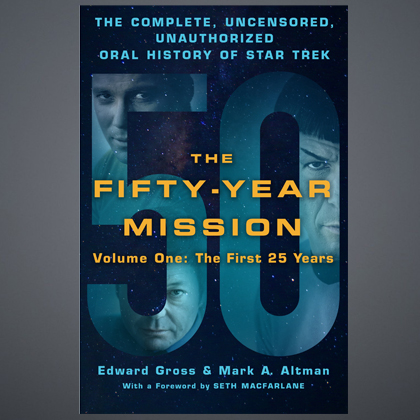 Signed copies of The Fifty-Year Mission, autographed by author Mark A. Altman!

Creature Features is proud to present signed copies of The Fifty-Year Mission, autographed by author Mark A. Altman, direct from our Star Trek event at our Burbank retail shop on June 25!

The incredible, definitive true story of the making of fifty years of Star Trek . . . in the words of those who made it!

This is the remarkable unauthorized, uncensored story behind the making of a television legend. There have been many books written about Star Trek but never a volume with the unprecedented access, insight, and candor of authors Edward Gross and Mark A. Altman. Having covered the franchise for more than three decades, they’ve assembled the ultimate guide to a television classic that serves as the final world on this unique pop-culture phenomenon.

The Fifty-Year Mission includes the voices of hundreds of television and film executives, programmers, writers, directors, creators, and cast members who were all part of Star Trek’s first twenty-five years.

And this isn’t just a book for Star Trek fans. This is a volume that will engage fans of television, movies, and pop culture who are interested in the nuts and bolts, the trials and the tribulations of making an enduring television classic.

This stunning hardcover volume comes in at a whopping 554 pages. Autographs may vary in appearance.

“Breathtaking in scope and depth, this is a must-read for Star Trek lovers as well as anyone who wants a better understanding of how television and film production works.” ―Booklist, starred review

“An absolute must for any Star Trek fan.” ―Kirkus Reviews

“As a lifelong fan, I thought I knew everything there was to know about Star Trek. Thankfully, I was wrong. Thanks to revealing, honest and ― dare I say it? ― fascinating interviews from the insiders who were really there, The Fifty-Year Mission is an epic tome that’s full of so much fantastic information, I felt like I was discovering the incredible behind-the-scenes story of Star Trek (and Hollywood, for that matter) all over again. It’s a page-turner in every sense of the word, and I could not put it down.” ―Scott Mantz, Access Hollywood